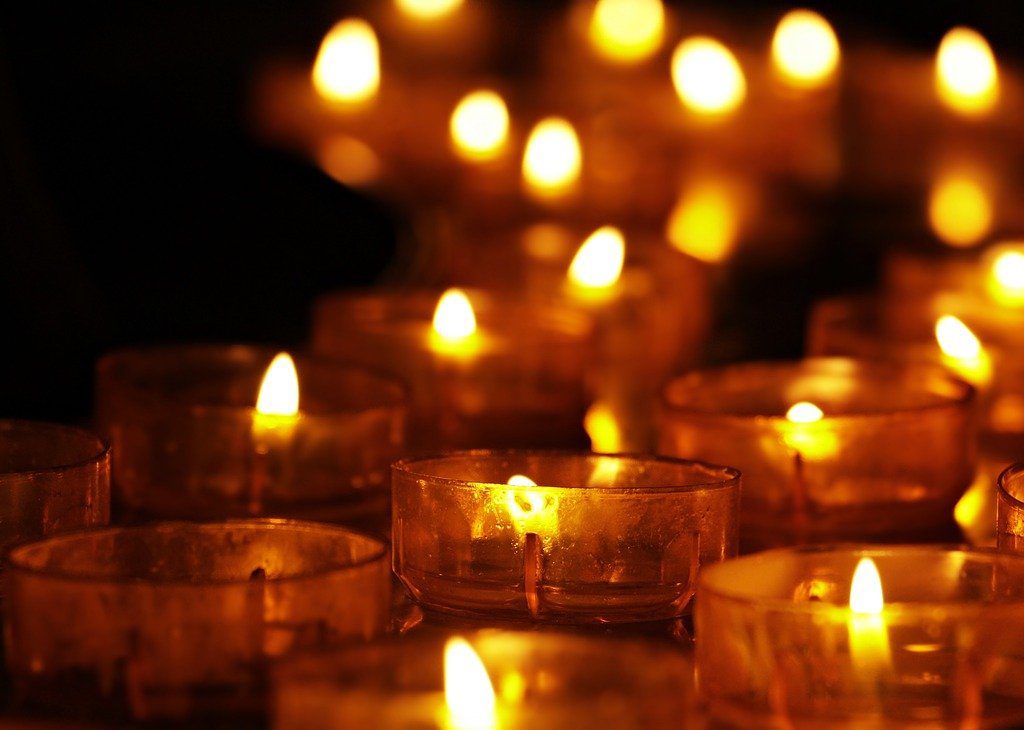 (англ.) Recommendation No. 9. On how to write about religion, denominations and/or religious organizations

Recommendation No. 9. On how to write about religion, denominations and/or religious organizations without bias, stereotypes and incitement to hatred

The Independent Media Council has prepared recommendations for journalists and the media seeking to cover religious events, in accordance with professional standards.

Article 35 of the Constitution of Ukraine guarantees everyone the freedom of religion including “the freedom to profess or not profess any religion, perform without impediment religious rites and ceremonial rituals individually or collectively, and conduct religious activities.” The unacceptability of discrimination on the grounds of religion is enshrined in the Ethics Code of Ukrainian Journalists: “No one should be discriminated against because of sex, language, race, religion, national, regional or social origin or political preferences.”

The Independent Media Council has prepared recommendations for journalists seeking to cover religious organizations, in compliance with professional standards and without deepening conflicts in society.

Avoid false generalizations. Covering the activities of a representative of a religious community, a clergyman, or even a hierarch (denominational leader) should not become criticism of the entire religious organization or community. The media should not create an illusion of the believers’ collective responsibility for the actions of individual members of the community, organization or its leaders, if there is no good reason to talk about their joint, concerted action.

The content of beliefs, religious rites or traditions should not be criticized or ridiculed unless they contravene the law or violate someone’s rights.

If, in your opinion, the religion’s dogmas or the calls coming from a religious organization contravene civil rights and freedoms or (as in the case of the article in Livyi Bereh referred to in the IMC’s opinion) there are attempts to justify calls for discrimination and violations by appealing to religious values and beliefs, it is necessary to seek expert commentary by theologists and lawyers, so that the article contains their professional assessment.

The same applies to situations where the statements by representatives of religious organizations show signs of xenophobia (e.g. homophobia in particular). For example, the statement by honorary patriarch of the Orthodox Church of Ukraine Filaret that the same-sex marriage is the cause of the coronavirus pandemic is xenophobic and should be disseminated in the media only with relevant commentary from independent experts. It is inappropriate to discuss a religious organization or figure in such situations as a party to a conflict.

It is unacceptable to selectively use the results of opinion polls or statistics to prove the superiority of a religion, denomination or religious organization over others, regardless of whether those figures are given in the author’s text or cited directly or indirectly. When using the results of opinion polls, you should always mention the sample, research method, question wording, time and other data, important in interpreting the figures.

In the case of religious communities not having a specific self-designation (e.g. Buchach district Protestants referring to themselves as “believers”), journalists should treat with caution the names given to those communities by other people (in this case, “kashketnyky (cap wearers)”). You can only use them if you are sure that the name is not perceived as offensive by the community.

Avoid insulting definitions, negative stereotypes, and labels that may increase the audience’s bias and distrust. The words “sect”, “cult”, “(non)canonical church”, “Uniates”, “schismatics”, “Shtundists”, “Islamists”, “infidels”, “priests”, “churchmen”, “Mormons” are unacceptable for use in the author’s (journalistic) text (as is the case, for instance, with strana.ua’s article “From sensation to oblivion. Five principal questions about tomos now one year old”, biased against the Orthodox Church of Ukraine). Citing such words is only possible when a journalist needs to give an example of an unacceptable statement. In such cases, the material should be supplemented by expert commentary on the unacceptability of discrimination, xenophobia or hate speech.

Check the facts, when coming up with characteristics related to religion, denominations, religious organizations and communities. It is important that the characteristics and statements not be dictated by prejudice and myths, being consistent with the current situation. For example, the statement that “Mormons have several wives” is false, since The Church of Jesus Christ of Latter-day Saints renounced polygamy over a hundred years ago. Similarly, in most Muslim communities around the globe, polygamous marriages have long since ceased to exist. Therefore, any characteristics related to religions, denominations, religious organizations, their beliefs and traditions need to be verified against reliable, unbiased sources.

The media should not be a platform for interfaith animosity. Do not disseminate accusations and negative statements by representatives of a religion, denomination, religious organization against others, if they are not directly related to the problem, topic or situation being covered in your material. If such statements are important in covering a social conflict, their meaning should be conveyed in indirect language, avoiding citing literally xenophobic statements or hate speech. It is unacceptable even to indirectly quote calls for violence and any illegal actions, except when the subject of your article is actually condemnation of such calls.

When covering a conflict between religious communities, always try to let the parties express their position equally, to the same extent. Postponed balance, i.e. presenting the position of each party in separate articles, separated in time, is unacceptable when covering religious conflicts. A clear example of such inappropriate actions was the unbalanced coverage of a conflict in December 2018 by the Public Broadcaster’s Vinnytsia branch, resulting in the dismissal of the editor-in-chief. Highlighting the positions of one party and ironing out the wrinkles in the plot led to being dangerously skewed towards one of the parties to the conflict.

When interviewing a representative of the conflicting party, make sure that this person is empowered by the community to make known a collective position, and not just speaking on his/her own behalf. Maintaining balance does not only mean citing directly or indirectly the parties to the conflict: the journalist’s task is to verify the statements made by all parties and include the results of this verification in the article. For example, if each of the two communities competing for a temple claims to have a legal right to own it, request to see the documents, find out if they are authentic, and contact the issuing authorities.

Church histories should not be unduly politicized by adding context, background, and comments not directly related to the events being covered. At the same time, mention should be made of the political aspects of the events and issues you are covering, if they provide an important context and are relevant to society at large and to your audience in particular.

Distinguish between political manipulation and participation in social and political life. Involvement of religious figures and organizations in politics and local self-government is not prohibited. However, such a prohibition may be contained in the statutes of respective religious communities; or political activity requires obtaining a blessing or other form of religious approval from higher persons in the hierarchy of a particular religious organization. According to the Constitution, the church is separated from the state, but the law does not prohibit clergy from participating in elections and other political processes. According to Article 5 of the Law on Freedom of Conscience and Religious Organizations “religious organizations do not participate in activities of political parties, or provide financial aid to political parties, or nominate candidates to state bodies, or agitate or finance election campaigns of candidates to these bodies. Priests have the right to participate in political life on an equal footing with all citizens.” If you are not sure whether the activities of the persons covered in your article contravene the law, it is better to consult an expert in election law, and if such activities may be unauthorized by  the respective religious organization, seek out the experts or this religious organization’s officials.

Media interest in the possessions of church leaders such as in the Church Gold investigation by Slidstvo.info – is justified by the fact that those people are to some extent public figures, publicly professing and promoting certain life values, e.g. chastity and modesty. In such cases, professional standards of journalism require that the persons featured in the article be asked for comment to state their position or refuse to comment. However, journalists should not interfere with the private lives of ordinary clergy unless justified by social significance (e.g. covering a conflict, a high-profile event) or discuss the appearance of their well-being (houses, cars, etc.) as evidence of corruption or misconduct. Let us not forget that clergy have the same civil rights and freedoms as other citizens, and the Ethics Code of Ukrainian Journalists requires that a person’s private life be respected.

The media is not a church court. Internal conflicts and discussions in religious organizations can be a subject of public interest and, therefore, covered in the media. However, journalists should not try to evaluate the actions of clergy and believers within the rules of their religious organization, unless their actions are also a violation of state laws and social norms.

Select experts carefully, taking into account the public position and place of work of each of them. Many experts commenting on religious issues are ideologically, denominationally, or politically biased, so their comments are not entirely unbiased. This does not mean that such experts should not be sought out, but their comments will add to your material a view of an expert community committed to one or the other party to the conflict. This must be communicated to the audience. A balance of biased expert opinions will not replace an unbiased opinion expressed by an independent expert.

The publication in the media of social network posts questioning the right to freedom of conscience or religion, discrediting religious organizations and inciting religious hatred does not release editorial offices from responsibility for disseminating content. For example, the article in the online media Vezha “Beware of Charismatics!“, containing negative stereotypes and labels attached to a particular Christian church and a vaguely defined circle of other religious organizations is a post copied from Facebook, with the original post now deleted. In such cases, religious organizations whose rights were violated have grounds for filing a complaint in a court of law or law enforcement agencies against the editorial office.

If journalists have a potential conflict of interest related to their affiliation with the religious organization being covered, the editorial board or the authors themselves should take special care to be impartial, verifying all the facts and citing the sources. We remind that the authors’ own assessments and judgments are unacceptable in news items and should be clearly separated from the facts in analytical and journalistic writing. 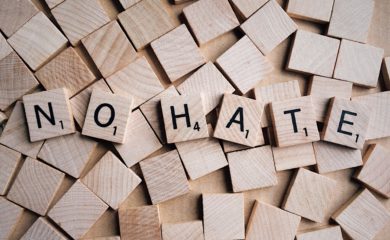 (англ.) Recommendation No. 10. On how to prevent hate speech against protected groups and stereotypes in the media

Freedom of expression protects not only neutral ideas or ideas that are favorably received but also those that offend, shock or disturb the State or any sector of the population[1]. Over time, the possibilityof stimulating heated public debate with provocative language developed into the so-called right to insult. Under international law, free speech is regulated […] 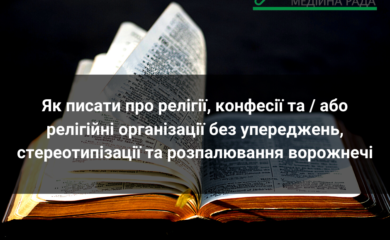